Forty years ago in 1978, Progress Publishers in Moscow released A Soviet Journey by the South African writer Alex La Guma. Today it stands as one of the longest accounts of the Soviet Union by an African writer. Yet it remains largely ignored, a non-fiction aberration within his library of politically committed fiction. La Guma was not the only African writer to describe the USSR and its personal and political meanings. Andrew Amar (An African in Moscow, 1960), William Anti-Taylor (Moscow Diary, 1967), and Richard Dogbeh-David (Voyage ay pays de Lénine, 1967) published shorter accounts that depicted their experiences studying and traveling in the Soviet Union. Fellow South African writer Christopher Hope composed a memoir of visiting Moscow (Moscow! Moscow!, 1990) toward the end of the Cold War, while the Jungian “white bushman,” Laurens van der Post, published A Journey into Russia (1964) at the height of it. Primarily an anti-communist screed, Van der Post’s account is technically longer than La Guma’s, but is nonetheless a questionable source given the former’s long-discredited reputation. Still, why did La Guma write A Soviet Journey, and what does it tell us about South African politics and the role of the USSR in the anti-Apartheid political imagination?

Born in 1925 and raised in Cape Town, La Guma was one of the Apartheid era’s most celebrated writers. He posthumously received the Order of Ikhamanga in Gold from the South African government in 2003, almost two decades after his death in Havana, Cuba, in 1985. He is still best known for his fiction, which captured the lives of day laborers, activists, prisoners, petty criminals, and impoverished families in Cape Town in such works as A Walk in the Night(1962), And a Threefold Cord (1964), The Stone Country (1967), and In the Fog of the Seasons’ End(1972). With Maxim Gorky as his literary hero, La Guma crafted a South African version of “proletarian humanism” (an expression of Gorky’s) that sought to represent the precarious and violent world of working-class life under Apartheid. In this regard, he was a member of a pivotal generation of new South African writers during the 1950s and 1960s, exemplified by Drum magazine contributors like Es’kia Mphahlele, Can Themba, Lewis Nkosi and Bloke Modisane, who sought to portray the vitality of urbanism in South African life. La Guma, Richard Rive and James Matthews were Cape Town counterparts to this Johannesburg scene.

Against this backdrop, A Soviet Journey appears as an anomaly in La Guma’s oeuvre in terms of genre, geography, and subject matter. However, despite these contrary qualities, it is also one of his most personal works, with memories of his father, his childhood, and reflections on the wider political world that he belonged to. Beyond his writing life, La Guma was also a member of a heralded generation of African National Congress (ANC) and South African Communist Party (SACP) activists that included such figures as Nelson Mandela, Walter Sisulu, Oliver Tambo, Joe Slovo and Ruth First. A Soviet Journey unquestionably captures this political side, while conforming to and expanding the widely-recognized political themes of his fiction.

Distinguished as La Guma’s longest literary work, fiction or non-fiction, A Soviet Journey is a memoir of his travels to the Soviet Union beginning in the late 1960s in his capacity as a representative for the ANC and the SACP. It is also based on a single trip he took in 1975 upon the invitation of the Soviet Writers Union. In short, it is a composite work that fills an important gap in his personal history, given the South African focus of his fiction that does not directly address his time of nearly two decades in exile, primarily in London and Havana. But A Soviet Journey is also compelling as a historical and political document of a period when an entire generation of activists left for exile. It points to the complex politics of the ANC-SACP alliance during the Cold War, when the anti-Apartheid struggle intersected with a broader set of Third World politics that was tri-continental—Africa, Asia, and Latin America—in scope and ambition. La Guma’s book provides rare insight into the global political communities that anti-Apartheid activists were part of, challenging more conventional understandings of this period that have gravitated toward nationalist politics and struggles internal to South Africa—the writings of Mandela, First, and Steve Biko being key examples of this fight on the domestic front.

More specifically, A Soviet Journey re-situates the important role that the USSR played for liberation struggles around the world as a patron, host, and political model—perspectives that have gradually been lost, particularly at a popular level, since the demise of the Soviet Union itself. Beginning with the 1917 October Revolution, Leninism provided an alternative model of self-determination apart from American Wilsonianism—one that combined nationalism with class politics. This strategic intersection, further articulated through Lenin’s “Preliminary Draft Theses on the National and Colonial Questions” (1920), held wide appeal for black and colonized activists around the world, resulting in the Black Belt Nation thesis and the Native Republic thesis, both of which argued for black liberation in the American South and South Africa, respectively. In both cases, a nationalist struggle would come before a socialist revolution—a two -stage process and strategy that broadly informed the 1927 League Against Imperialism meeting held in Brussels, which was sponsored by the Comintern under the leadership of Nikolai Bukharin and promoted anti-colonial liberation movements around the world. Marxism-Leninism consequently inspired and empowered a spectrum of activist-intellectuals during this period before the Second World War, including Claude McKay, George Padmore, Langston Hughes, and M. N. Roy, to name only a few.

It also inspired James (Jimmy) La Guma, Alex’s father, who attended the League Against Imperialism meeting as a representative for the Communist Party of South Africa (founded in 1921) along with Josiah Gumede of the ANC. This was an early rehearsal of the later affinity and collaboration between both organizations starting in the 1950s. The senior La Guma would go on to cultivate a political career of his own, but these sequential political positions of national liberation followed by socialist revolution would continue to shape liberation politics up through the early 1990s and the CODESA process. The argument of “colonialism of a special type” developed during the 1950s is the best known iteration of this political logic, which pitched South Africa as a colony despite its self-governing status as of 1910. But this position had deeper roots, in addition to experiencing debate and revision over time.

This evolving program also informed Alex La Guma’s writing. His early fiction not only captured the oppressiveness of Apartheid authoritarianism—and, thus, the dimensions of the colonial question in South Africa—but also his later work, after he left for in exile in 1966, examined the fissures, dilemmas, and potential resolutions for the national question. His later novels In the Fog of the Seasons’ End (1972) and Time of the Butcherbird (1979), which appeared the same decade as A Soviet Journey, grappled with this question specific to urban and rural ar eas, respectively. But A Soviet Journey illustrated an actually existing model of political revolution, decolonization and self-determination in the eyes of La Guma. The Soviet system—a multinational federation of states—had solved the national question through socialism. Indeed, in contrast to the frequently grim and adverse worlds found in his fiction, A Soviet Journey is a joyful work, with La Guma celebrating everything about the USSR. For this reason, La Guma’s sanguine outlook can be critiqued in retrospect, particularly given knowledge of the Stalinist purges of the 1930s and the Gulag system more generally in the decades thereafter. But he was not alone. Figures such as Padmore, Paul Robeson, W. E. B. Du Bois, and Angela Davis continued to promote the Soviet model as an alternative to the racial capitalist system of the Euro-American West.

Revisiting A Soviet Journey today not only provides for a reconsideration of a neglected text, but also the restoration of a personal history, an intellectual history and a political future that has since been lost. It expands the definition and possibilities of African literature. As a programmatic statement, A Soviet Journey also opens a broader set of parameters as to how South African politics can be approached, as well as how the black radical tradition, as once formulated by Cedric Robinson and which has been centered in the North Atlantic, might be extended to the South Atlantic and across Africa more generally. Anthony Bogues has discussed two modes within this tradition—one heretical and another prophetic—that underpin its potential for rupturing the Western Marxist tradition. Though La Guma’s vision of a future South Africa was never fulfilled along the lines he imagined, A Soviet Journey reflects both of these qualities, exemplifying a type of “epistemic displacement” (to use an expression of Bogues’s) that points to the momentary conjuncture between the Black Atlantic, the Third World and South African politics during the Cold War. La Guma and A Soviet Journey constitute a pivot point between all three, providing a correction to the liberal triumphalism that has often inhabited post-Cold War historiographies of the present. It is a reminder that national self-determination remains only a first step. 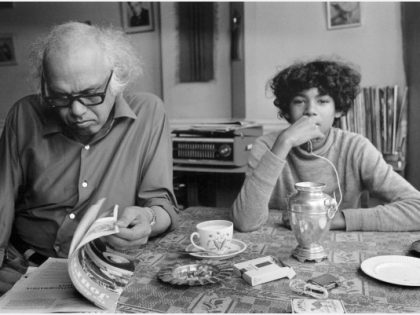 The Worker with a Pen

In his life and books, Alex La Guma struggled for a society in which all people could find their humanity, argues his friend Ngugi wa Thiong’o.

All your faves are problematic

A brief history of Chimamanda Ngozi Adichie, stanning and the trap of #blackgirlmagic.

A Revolution in Many Tongues