In mid-July 2018 a short video of an ad hoc execution in northern Cameroon of two young women and their children—one clasping the mother’s hand, the other wrapped securely on the mother’s back—circulated on social media sites. Armed soldiers in military fatigues escorted the two women and their children to their roadside death, taunting and striking them as they stumbled along. “Lift up your calabash so that we can see your face. You, B[oko] H[aram], you are going to die.” As they blindfolded the women and made them kneel, one soldier said softly, “Little one, this hurts, but you know what your parents did.” Stepping back, the soldiers took aim and fired 29 shots into the backs of their four victims. The bodies fell lifeless and silent. “This one is still living,” stated one of the soldiers before shooting more rounds into the limp body of the little girl.

Following the video’s circulation on Facebook and Twitter, Amnesty International issued a press release authenticating it. Cameroon’s officialdom, with its singular focus on maintaining power since 1982, quickly refuted Amnesty’s report, calling the video a “fake.” But using a crowdsourcing approach and Google Earth mapping, a frame by frame analysis revealed the Mandara Mountains region of northern Cameroon to be the location of the crime and estimated that it likely took place around December 2014. The perpetrators are now reported to have been arrested although it is not known where they are held or what, if any, disciplinary sanctions they will face. A Commission of Enquiry—in Cameroon, the phrase a euphemism for an official cover-up—is apparently forming.

The video from northern Cameroon provides shocking visual evidence of Cameroonian security forces’ abuse and torture of civilian populations in the Lake Chad basin region where Boko Haram operates. It forces viewers to bear witness to the everyday crimes committed with impunity by state forces in the name of fighting terrorism. Several days after authenticating the viral video, Amnesty International released a report revealing that the Rapid Intervention Battalion (BIR) of Cameroon, with the assistance of the US military, routinely commits war crimes, including torture, has converted a primary school in Fotokol into a military base, making schoolchildren a military target, and has established unofficial detention sites for those alleged—with little or no evidence—to follow Boko Haram.

State actors throughout the Lake Chad basin where Boko Haram recruits—Cameroon, Chad, Nigeria and Niger—have nourished the portrayal of the movement as an international jihadist terrorist in nature, akin to al-Qaeda, as a way to benefit from international anti-terrorism assistance—spearheaded by the United States and by France—that shores up their tenuous hold on power. Under the cover of an anti-terror law passed in December 2014, the Biya regime has unleashed the brutal exactions of BIR—assisted by 300 US troops on the ground, as well as technical, material, logistical, and financial support. But Cameroon’s internationally recognized statehood must not prevent us from asking whether BIR represents the greater threat to the region’s civilian populations.

Boko Haram employs a three-pronged recruitment strategy in the Lake Chad region. The first, predominantly religious, is emphasized in the movement’s name Jama’atu Ahlis Sunna Lidda’awati Wal-Jihad, which means people engaged in the propagation of the Prophet’s teachings and jihad. The religious message put the movement on the radar of the so-called global war on terror only after Boko Haram, founded in Maiduguri, Nigeria in 2003, turned to violence in 2009 in retaliation against the Nigerian police for assassinating the movement’s leader, Muhamed Yusuf. The second is framed in regional terms and harkens back to the precolonial intellectual and political greatness of the Sahelian empire of Kanem-Borno and its 19th century jihadic renaissance in the Sokoto Caliphate. The third register, and arguably the most important for understanding Boko Haram’s ability to draw followers, appeals to people, including non-Muslim indigenous populations of the arid, mountainous terrain along the Nigeria-Cameroon border, whom the state—whether colonial or postcolonial—has ignored or dispossessed for generations. To young people in this category, whether Muslim or not, the message of recruitment that is most successful is Boko Haram’s promise to supplant the minimalist, failing or simply absent services of the Cameroonian state with alternative forms of community organization. As a simple yet persistent example, in the distribution of mopeds to young unmarried men, Boko Haram plants a hope of livelihood—and therefore marriage, starting a family, building a life, becoming someone—where none existed before.

To be very clear, we are not apologists for Boko Haram, a destabilizing movement that threatens security, has caused deaths and kidnappings in the tens of thousands. There is no doubt that Boko Haram spreads terror throughout the Lake Chad Basin. However, we urge that Boko Haram’s radicalization, resistance, and ability to recruit both Muslim and non-Muslim adherents can only be understood when the atrocities it commits are juxtaposed with those committed by state forces in the region.

Researchers estimate that since then casualties have climbed to 33,000 in the northern Nigerian region alone. Half of these deaths are attributed to state security forces. In Cameroon, thousands of civilians suspected or accused—without evidence—of conniving with Boko Haram, are arrested and detained in inhuman and deadly conditions. The arrests have at times targeted entire groups—villages or settlements—rather than individuals. For example, in Kossa in February 2015, 32 men were arrested after rumors spread that the village was supplying food to Boko Haram.

The slaughter of civilians by soldiers in uniform certainly generates resentment among local residents of the dry and mountainous border regions long forgotten by the states now dispatching armed troops with nothing to offer besides bullets. Is it really surprising that many have become increasingly attuned to Boko Haram’s message and join the movement as a way to resist and protect themselves from state forces, who seem to have free reign to terrorize, torture, kill and loot with impunity? Just days before the shocking video’s release, James Fahy, of the US Army Reserves, wrote a piece for Task and Purpose insisting that the US advise and assist missions such as the one in Cameroon, can strengthen “a military that is used to abuse a local population,” and thereby “lay the groundwork for more violence that further destabilizes the country.”

A local and long historical perspective is essential to discerning the persistent resonance of Boko Haram and how it operates differently from other terrorist movements that have seized international headlines. A key objective of the Boko Haram, Islamic Protest and National Security research network of which we are a part is to bring historically and politically contextualized understandings of religion and ideology to bear on public policies promoting political stability and social justice throughout the Lake Chad Basin and beyond.

As important, for local historical perspective, is the comparison of BIR operations in the Boko Haram affected northern regions with BIR tactics in the western anglophone region of Cameroon where a secessionist movement has erupted into violence. Reports on state forces’ operations in the anglophone western provinces, long reported in the anglophone Cameroonian press and digitally curated for over a decade by Dibussi Tande, have recently surfaced in international media. In anglophone Cameroon, BIR troops allegedly set fire to homes and neighborhoods, routinely torture as a mode of interrogation and summarily execute suspected supporters of Ambazonia, the breakaway nation that, on October 1, 2017 symbolically declared its independence from the Republic of Cameroon after more than 20 years of seeking political and legal strategies to counter its progressive marginalization since decolonization.

Perhaps in the eyes of some their respective adherents, Ambazonia’s struggle for economic, political and linguistic autonomy has little in common with Boko Haram more than 1,000km away. Yet in the eyes of the Cameroonian state, they are equivalent. Both have resulted in state security force’s unbridled collective punishment of entire communities, displacing populations from the north and from the southwest on an increasing scale.

Days after viewers worldwide watched Cameroon’s BIR soldiers summarily execute a baby, a child and their mothers, Paul Biya, now the second longest serving president in the entire world, tweeted his intent to run for reelection in October 2018. Before the announcement, Biya set his house in order. In early July, the Cameroonian president announced the cancellation of the concurrent legislative and municipal elections. During an official visit to Nigeria in early July, Emmanuel Macron publicly declared France’s intent to support the cohesion and stability of the [Cameroonian] state and offered “all my support to the government so that it can stabilize the situation” in a “clear national context.”

With his hold on power shored up by US financial and military support since the US Africa Leaders Summit of 2014, the ongoing promise of France’s support, a contract for the exploitation of natural gas via the Anglophone port city of Limbe recently negotiated with the British-based company New Age, and a co-opted opposition declaring themselves “All together with Paul Biya, comprehensive insurance for Cameroon, the reassuring man of certainty,” Biya can indeed rest assured of his eternal hold on power, perhaps fulfilling his 2004 promise to govern Cameroon, even posthumously, for at least 20 more years. In the aftermath of the last presidential elections, critical theorist Achille Mbembe commented that, having perfected the formula of transforming power into power, Paul Biya could govern from the grave. But how much state-sanctioned terror will it take to make Biya’s international allies—and particularly the US AFRICOM task force now undeniably strengthening a Cameroonian military that is used to abuse a local population—question the legitimacy of Biya’s now 36-year-old state? When will the state itself be internationally recognized as Cameroon’s primary source of destabilization? 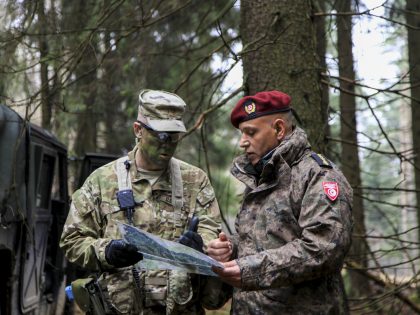 In post-uprising Tunisia, the western backed military is hampering the country’s transition to democracy.

Is the US military on its way to Ghana to set up base? What do Ghanaians think.

Most people are unaware that U.S. troops are active in almost every African country.

The strange history of an imperial skirmish in Niger

There is a collective national ignorance that surrounds the United States’ vast military presence in Africa.

African military partnerships in the age of the ‘enemy disease’

Military-to-military relationships have become the dominant mode of U.S. engagement with the African continent, overwhelming cast as institutional partnerships.

Recent revelations, which have always been suspected, have strengthened the United States' role in the Liberian civil war, adding fuel to claims of American intervention in Liberia since its founding as a Western style nation-state.
12.20.2010

Carl LeVan
Guest Blogger
An academic article I wrote in the current issue of the journal Africa Today offers a new explanation for negative African reactions to the US Military Command in Africa (AFRICOM). …