Lately I have been struck by how strongly held our ideas about race and nationhood are. That these ideas are socially constructed or artificial—I teach a course on their historical construction in Africa through colonial science—does not mean they are not powerful.

Living in Cairo, I attended the 2019 Africa Cup of Nations (AFCON) finals between Senegal and Algeria. The closing ceremony before the match featured an impressive light and fireworks show with music by Ghanaian Afropop singer Fuse ODG and Egyptian pop diva Donia Samir Ghanem. It was also a preview of racial binaries that would become more apparent once the football started. Algeria won the match 1-0 on Baghdad Bounedjah’s deflected ball in the second minute. A stout Algerian defense prevented the Senegalese, favored by many to win the tournament, from equalizing.

Senegalese fans comprised a relatively small contingent in the 70,000-seat stadium: perhaps a few hundred in comparison to the tens of thousands of Algerian supporters who made the trek from Algeria and France, many on charter flights provided by the Algerian football federation. The rest of the fans came mostly from Egypt. The majority of Egyptian spectators clearly supported Algeria. Why? After all, there has been bad blood between Egyptian and Algerian football fans since at least 1989 when a qualifying match in Cairo for the 1990 World Cup led to attacks on Egyptian fans and an Egyptian coach. Violence between football fans of the two nations erupted again in 2009 in qualifiers for the 2010 World Cup.

Yet the ties of a putative “Pan-Arab” identity (in spite of old Egyptian tropes about Algerians as violent and barbaric Berbers) seem to have driven most Egyptian loyalties toward Algeria and away from Senegal. My wife, watching the AFCON final at home on BeIN Sports, noted a similar affinity from the Qatar-based TV channel. The coverage focused on Algerian players and coaches at the expense of the Senegalese: there were few images of the Senegalese team in comparison to the Algerians, and BeIN journalists interviewed mostly Algerian players and coaches before and after the game. The voices of the BeIN commentators became more animated when Algeria had the ball. Taken together, these factors demonstrated a clear bias favoring Algeria. This bias seemed to confirm the binaries of race and nation displayed in the pregame closing ceremony.

Perhaps I should not have been surprised. After all, shortly after my 2017 move to Egypt, a taxi driver told me that the Egyptian national team was getting ready to play against Uganda, “an African team.” When I asked him if Egypt was not also in Africa—after all, it was an AFCON qualifying match—he responded, “Yes, but we Egyptians think of ourselves more as Arab than African.” After posting on social media that I was ready to watch the AFCON final, an Egyptian friend and colleague responded that “of course” she was cheering for Algeria but she hoped that we enjoyed the game. Why “of course?” Did it have something to do with an assumed cultural division between “Arabs” of North Africa and “Blacks” from sub-Saharan Africa? By the way, other friends from Ethiopia, South Sudan, and Uganda were “of course” supporting Senegal. Why? Why “of course?”

Some students in my sports history class protest at the start of the course that sport should not be “political.” But they learn that sports became political when European colonial officials and merchants first began organizing sporting events in Africa as a way to export the values of the “civilizing mission,” like hard work and fair play—as if Africans had no sense of these values themselves—and “muscular Christianity” to Africans. As the students consider their families’ experiences in Egypt with sport and corruption, with race, nation, and colonialism, this more critical (or perhaps cynical) view of sports history begins to make more sense. To the chagrin of those who still believe that sports can maintain some sort of “purity,” sport continues to be influenced by race, ethnicity, religion, social class, and of course, capitalism and nationalism. In the colonial era, race divided the “winners” from the “losers” as determined by global capitalism. Sport provided the allegedly non-lethal laboratory for demonstrating the racial hierarchies into which Westerners divided the world, especially after the publication of Charles Darwin’s theory of “natural selection.” If sport was the laboratory, war was the proving ground—manifest on the battlefields of the “Scramble for Africa” and the two world wars that followed.

Thus, perhaps I should not have been surprised to see binary conceptions of race and nation displayed in the stands of Cairo International Stadium or on the BeIN Sports Channel. Far from being a natural case of “us” against “them,” such racial and national consciousness emerged with capitalism and colonialism in mid-nineteenth century Africa. Though colonialism ended around 1960 in most of the Continent, its legacy was alive and well around the championship match for the 2019 Africa Cup of Nations.

Football and neoliberal repression go together in Egypt.

Algeria reached the African Cup final for the first time in 29 years after defeating Nigeria. It can’t be divorced from politics back home.

Egypt got knocked out in the Round of 16, but the hosts have been hamstrung by multiple events, including the military’s control. 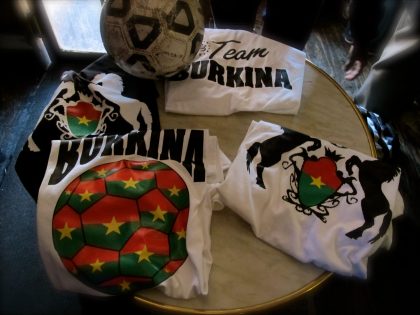 African Football at The Shrine

Watching the African Nations Cup Final at The Shrine in Harlem.