As the new school year kicked off in South Africa at the end of January, millions of young people were flocking the streets looking for opportunities. Those who just received their matric (or high school) results were standing in long lines to secure limited spaces at universities or colleges, recent graduates were updating and sending out their CVs to possible employers, and those who remain unemployed will try their luck again. Unfortunately, millions of young people came to find themselves closed off from career advancement opportunities.

With 36% (20 million) of the population under the age of 35, children and young people lie at the heart of South Africa’s untapped potential. Yet, more than 30% of young South Africans between the ages of 15-24 are not in any form of employment, education, or training; 46% of 25-34 year olds fall into the same category. This equates to approximately 7.9 million young people out of work, education, or training opportunities.

In the beginning of every new year, youth unemployment spikes to pandemic proportions. This is mainly due to new entrants into a labor market that is not creating enough job opportunities. During this period, among graduates between the ages of 15-24, the unemployment rate was 31% compared to 19% in the 4th quarter of 2018—an increase of 11 percentage points quarter-on-quarter.

Young people have a tough relationship with employment: youth unemployment now is recorded at 56.4%, the highest globally, and 63.4% of the total unemployed population is young people. The year 2019 recorded the highest number of retrenchments and unemployment rates in 16 years. The “old” saying remains that “last in, first out,” which means young people are the first in the firing line when there is high retrenchments.

The government can no longer sweep this crisis under the rug. Some legislative and policy instruments, such as the National Youth Policy (2015) and the Youth Employment Service (2019), brought about resounding hope. Yet they have not implemented many of their intended resolutions. In his first State of the Nation Address in 2018, President Cyril Ramaphosa recognized youth unemployment as our “most grave and pressing challenge” as South Africans.

Economic and political cost of this dire situation

17 million South Africans live on social grants from the government. In 2017 alone, social grants received by people under the age of 35 increased by 11% and continue to grow at that rate. The exclusion of young people from opportunities is building a huge population of citizens highly depended on the government. The Mail and Guardian newspaper recorded that 89% of matric leaners who wrote the 2019 exams are grant beneficiaries. Most of them will be turning 18 and will be cut off and left with nothing to make way for themselves. Research by the University of Johannesburg shows that a person spends over R500 per month when looking for a job. More and more young, functional people are pushed out of opportunities and depend on the government for their livelihoods. The government was projected to spend R193.4-billion in 2018-2019 to R223.9-billion by 2020-2021, growing by an average of 7.9% annually. This is money that could be redirected to other needs of South Africans, such as health, housing, and education.

Many researchers have proven that a pool of young people who are not in employment, education, or training are more prone to be entangled in crime, drug abuse, poverty, and violence. In recent years, South Africa has been experiencing high levels of violence. This has moved to almost every part of South African society. Gender Based Violence in South Africa is now 5 times the global average, drug abuse is 3 times the global average, and murder, mental illness, violence in schools, and rates of suicide keep on increasing yearly.

The decline of youth organizations

Youth formations of the three biggest political parties have been found wanting in the past years. The African National Congress Youth League (ANCYL) has been in disarray since the expulsion of its former president, Julius Malema, in 2012. The Democratic Alliance (DA), throughout its history, has not been at the forefront of issues facing the youth. Only the Economic Freedom Fighters (EFF), which Malema went on to form, seem to have a “legitimate” claim on youth issues, but the party has been entangled in corruption allegations, the Venda Mutual Bank scandal, and internal leadership fights that has seen many young party members being expelled from the party.

The top levels of South African social hierarchy are still occupied by senior citizens. The average age of a Member of Parliament is said to be at 66, and the average age of a farmer is 65. This of course is seen throughout most sectors of South African society. Young people show far higher rates of unemployment than older people. This might be justified by the lack of experience among young people, yet the gap shouldn’t be this huge due to the diminishing number of senior citizens and the rise of young people. This is not to say old people must be replaced with young people, but it shows that more spaces, specifically for young people, must be created.

The country cannot continue losing young people to poverty and unemployment. Millions of young people with talent are wasted year in year out. A country that doesn’t invest in its youth will fail at solving its immediate and future challenges. It is evident for now that young people do not know where to go; in 2019 the Independent Electoral Commission (IEC) recorded a 47% decrease in youth voter turnout. As young people, it is time to demonstrate and put this crisis at the center of national dialogue. This will require united campaigns and action from all young people across the country. 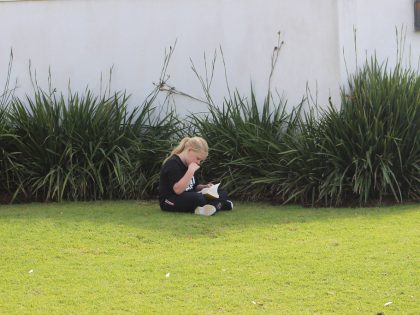 Why are South African children struggling to read properly?

Fallists draw on scholars and activists like Fanon and Biko, and concepts like intersectionality, to weave together a decolonial framework.

We speak to an aid worker and trade unionist at the forefront of campaigns to halt the transnational corporate education reform movement. 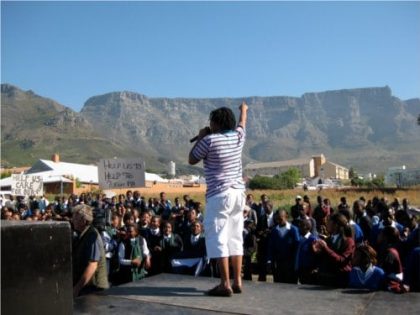 Some of you probably heard about Equal Education, a new South African mass movement to campaign for and end to education disparities inherited from Apartheid and neglected by the democratic government, for the first time …