In January 1977, over 16,000 artists and musicians from all over the black world, including the United States and Europe, came together in Lagos, Nigeria, for Festac 77, an event paid for by Nigeria’s military government. For one month, the artists took photographs, made music, and put on plays. What resulted was a flawed though remarkable event, which at the time art historian Robert Farris Thompson described as a sort of creative nexus where “such men and women are operating in terms of total black victory in which disparates have been conjured into co-existence from an overriding idea of utmost reconciliatory power.”

Four decades have elapsed since the festival, which is ample time for not just a renewed appraisal of the gathering in terms of its significance but also a moment to reflect on some of the politico-historical dynamics of the era that compelled Nigeria to gamble its reputation with a high stakes project despite its many socio-economic issues and a fractious internal political landscape. Since then, Nigeria, the region, the continent and global pan-African sphere have undergone mutations in ways not even the most prescient of dreamers could have envisioned.

Surprisingly, Festac’s legacy is a paucity of written memoirs documenting a gathering that congregated some of the continent and its diaspora’s brightest filmmakers, photographers, dramatists, musicians, dancers, poets, writers, and activists. As Ntone Edjabe, the Cameroonian-South African founder and editor of the South African collective Chimurenga summarizes it: “The people who experienced Festac seemed unwilling to write it, as if bound by an unspoken nondisclosure agreement. And so its stories circulated in the manner of a family secret—a family of millions of people.”

Now Chimurenga has fired the opening salvo in effort to redeem this important chapter in history with a publication that is as much a treat for polyglots as cultural historians. The hydra-headed Cape Town outfit, which describes itself as “a project-based mutable object,” is equal parts creative laboratory, bookstore, and digital archive, and has conjured projects including Chimurenga magazine, The Chronic Gazette, African Cities Reader series, and the Pan-African Space Station (P.A.S.S.). With the publication of Festac ’77, the Chimurenga collective shift their gaze from Laurent-Désiré Kabila’s 2001 assassination in Kinshasa (Who Killed Kabila I & II) to the blackest and largest ever gathering of artists from Africa and its diaspora in 1977 in Lagos. Festac ’77 distinguishes itself by engaging texts and subjects that speak to a global pan-African aesthetic and spirit that seemed to have retreated to the underground in the 1980s, as geo-strategic feuds, neoliberal evangelists, and the development-industrial-complex (DIC) found fertile ground across the globe.

The publication is an amalgamation of meticulous curation and robust research. And if proximity is blurring, then space and time has afforded the Chimurenga team enough distance to resurrect a seminal gathering whose impact continues to stimulate conversations amongst its intended audience, one that stretches across the continent, and beyond the Indian and Atlantic oceans. In an interview with Kwanele Sosibo of the South African newspaper the Mail & Guardian, Edjabe points out that the Chimurenga team wouldn’t have had access to some of the material compiled in the publication without taking the time to build trust in networks in places they’d never visited. “We’re fortunate to have brilliant researchers like Stacy Hardy, Graeme Arendse, Duduetsang Lamola, and Ben Verghese in the group. We used side projects to advance the research—for instance we published an issue of The Chronic in 2015 that examines divisions between north and sub-Saharan Africa, a central issue at Festac. Through such prepublications we were able to gather and produce material on some of the key questions of our research.”

But Festac ’77 is much more than a retrospective and readers needn’t teleport themselves to late 1970s Lagos, with detours in Dakar and Algiers, to experience the events captured in its bulky pages. Instead they’ll find details about the geo-political rivalries that resulted in Nigeria’s decision to host the gathering despite being just seven years removed from a costly civil war, the images of which would set the standard for an expanding Western global media particularly fixated on negative images of the continent. It provides rare insights into the cultural and ideological divisions that marked the lead up to the festival’s organization. Africans states were still mildly tipsy from a previous decade when new flags and anthems seemed to promise a new dawn; one which merely two years earlier had just witnessed Samora Machel’s Mozambique gain independence from Portugal, but also one in which Ian Smith’s Rhodesia was still under its white minority rule, where dreams of Namibian independence hadn’t taken as much form, and in which a few months later, Steve Biko was murdered by apartheid police. It is fitting that the contributors, many born around that time, have had the distance and are now old enough to appraise the vanquished promises and fleeting moments of hope that marked their entry into the world, and if older, their coming of age.

Readers will emerge from the image-filled Festac’ 77 with perhaps more questions than answers, especially against the backdrop of a resurgent US based Black Lives Matter movement. They may wonder if a similar gathering today could mobilize the proverbial “family of millions” the way South African apartheid mobilized their predecessors. Would the host country have the resources to undertake the task without the backing of a cast of multinationals brandishing the “Africa rising” narrative? Would the gathering remain grounded in its pan-African ideals or would it assume an Afropolitan character? Or would the substance and revolutionary spirit of a bygone era as represented by the former be replaced with stylish signifiers lacking in substance?

These and similar questions will likely arise as readers peruse the snapshots of a world that no longer exists, a portal in which they’ll discover previously little known details about its planning, the shifting cast of stakeholders, and the many false starts that marred its launch. They’ll find details like Nigeria’s resistance to Senegalese poet president Léopold Sédar Senghor’s attempts to inflect the Lagos gathering with négritude sensibilities; allegations attributing General Yakubu Gowon’s 1975 overthrow to his government’s mishandling of Festac’s preparations; they will read how the Nigerian government circumvented Britain’s reluctance to return the looted royal Benin mask by commissioning a replica from Benin craftsmen for use as the gathering’s icon, subverting the Western art world’s obsession with the concept of originality; they’ll read Guinean president Ahmed Sékou Touré’s speech at the gathering in which he affirms his country’s autonomy on continental and global issues, but above all, its position on the Palestinian question.

But readers will also find details like Fela Kuti’s objection to the festival and his decision to host a jam session—of course, unrecorded—at his African Shrine that included guests of Festac, including Brazilians Caetano Veloso and Gilberto Gil, Hugh Masekela and Stevie Wonder, and in the process, infuriating the military government of General Olusegun Obasanjo. Former Egypt 80 drummer Tony Allen, who died earlier this year of COVID-19, believed Fela’s dismissive stance towards the festival is the reason the Obasanjo government ordered soldiers to raid Kalakuta Republic the following month, resulting in the death of Funmilayo Anikulapo-Kuti, Fela’s mother, and subsequently the birth of the song, “Coffin for Head of State.”

According to Edjabe, the festival also resulted in the recording of about 40 other albums, a vast amount when compared to the miniscule volume of writing about it. There were also poems by Audre Lorde and Jayne Cortez, an essay by Wole Soyinka, and historian Andrew Apter’s anthropological book length project, which in his view is intriguing given the number of notable artists, thinkers, and writers that congregated in Lagos.

There’s no doubt that Chimurenga’s Festac ’77 will fill the narrative void about an event that was significant, and its effort must be commended for shattering the silence that governs aspects of our recent history.

The Chimurenga arts collective explores the relevance of FESTAC, a near forgotten, epic black arts festival held in Nigeria in the mid-1970s, for our age. 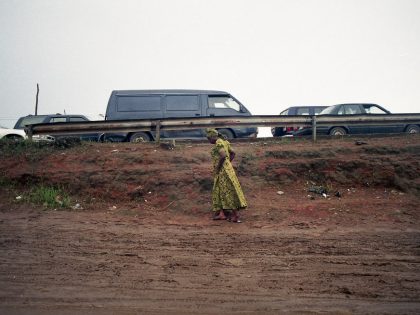 Biafra in the film archives

What personal and collective memory is evoked when we encounter films from a historical period? 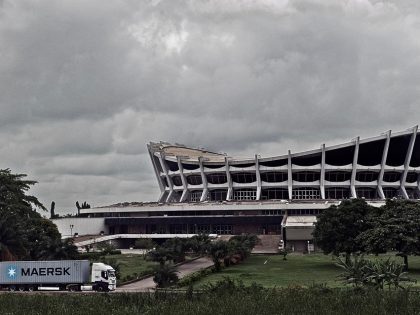 Controversy and the National Arts Theatre in Lagos

The theater, built by the military and finished in time for FESTAC in 1977, has always been a site of public disagreement.