March 25th is dedicated in the world to the theater. In the spirit of that day, stage actors gathered at Habib Bourguiba Avenue, in front of the Municipal Theatre, Tunis. But, apparently, this event coincided with a demonstration staged by a religious group that most Tunisians refer to as “Salafists”. The term “Salafist” is beginning to replace the word “Islamist” in Tunis these days.  In summary,

Salafism is not a unified movement. Instead, it is an umbrella concept for a number of branches of Sunni Islam. “They propagate what they consider an original form of Islam, tracing it back to a ‘Golden Age’ around 1,400 years ago, from which Muslims have gradually moved away in the course of the centuries … Their goal is to recreate this original form of Islam …

Never mind that activities attributed to these so-called Salafists, including pursuing women to force them to wear the hijab or niqab, raiding bookshops and bars, and threatening owners of such establishments, are in contrast to the original Salafist movement that emerged in the late 19th and early 20th centuries as a part of the enlightenment and reform movement that was grounded in peaceful change.

Back to Habib Bourguiba Avenue in Tunis.

The gathering of “Salafists” reportedly threw eggs, bottles, and other objects at the performing artists. They also allegedly prevented the artists from leaving the theatre until rescued by the police. Following this incident, Tunis artists condemned both the interior and culture ministries for failing to protect the actors from the violence and for not protecting their freedom of speech from the “salafists”. This was not the end of the matter though.

Come May 26: the revenge of the theater actors on Habib Bourguiba. This time around, the events went well without many hitches. No counter gatherings of salafists. Plays, operas, children’s events, participatory performances by audiences, and even some “open society” speeches lit up the front of the municipal theater. Some of the activities and performances are captured and presented in the photographs I took in Tunis featured here. 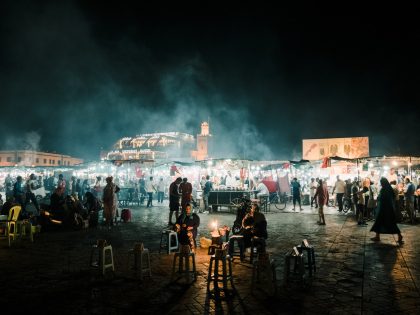 A pivot towards Africa

The positive reactions of Africans to Morocco’s performance at the World Cup are not outliers. Sport has often challenged outsiders’ view of Africa’s regions as disparate and disconnected.

Tunisia’s denial of its African identity persists today. Black Tunisians are fighting to change that.

Arabic literature and the African other

Racist, anti-black stereotypes persist in Arabic literature. It reveals a racial anxiety and othering of Africa among celebrated Arab authors.