Oupa Lehulere’s political life began as a schoolchild where he played a central role in organizing the 1976 student uprisings in Cape Town. He would develop into one of the country’s foremost organic intellectuals, with an unmatched grasp on political economic theory and a well-known penchant for a sharp polemic to settle debates.

Over decades he helped build Khanya College, a popular education organization that taught the importance of social movements and precarious worker initiatives. He never wavered in his commitment to revolutionary Marxism and remained dedicated to building working class organizations throughout his life.

Khaya College emerged in the mid-1980s, a tumultuous period in the fight against apartheid. Its primary goal was to create a learning space and bridge to tertiary education for black and marginalized students who could not access white universities. It was established by the South African Committee for Higher Education (SACHED), which was at the time led by former Robben Islander, Trotskiest, and educationalist, Neville Alexander.

By 1994 SACHED evolved to NGO status, and Khanya College became a base for activists of many persuasions and backgrounds, and also a home for debates of the time. The motto of the organization was “Education for Liberation.”

Fast forward two decades, and as young activists, we had been politicized in the wake of the massacre at Marikana and swept up by the struggles in the universities a few years later. The resounding defeat of the Fallist movement left many of us dejected and demobilized. It was Oupa who reminded us that the preconditions for progressive change and revolutionary victory are forged in the historic school of harsh conflicts and cruel defeats.

He took many of us under his wing and pushed us to study, to think, to debate and, most importantly, to continue to engage in organized politics. In the process, he challenged our thinking and our practice. As a teacher and an interlocutor he expertly guided us through a journey to sharpen the contradictions of the ideological debates that were ignited under the banner of Fallism.

Many of our comrades joke that it was Oupa that made us finally meet our “ideological Damascus moment.” Oupa waged a persistent struggle to liberate South African Marxism from the chains of Eurocentrism. At the same time, he insisted that class must be central to any liberatory politics. After years of denial, many of our comrades finally committed to revolutionary socialist ideas—to grounding in a deeper understanding of the political economy of capitalism and its development and impact in the South African context.

Once again, our mentor took us on this journey. Between 2017 and 2020, Oupa ran a reading group at Khanya College on Marx’s Capital. Every second Sunday for more than two years we worked through the magnum opus, line by line. The attention to detail was incredible. The slightest moment of miscomprehension was picked up on and thrashed out until, as Oupa would say, we had “ironed out the slippages.” Oupa’s approach to theoretical study reflected his approach to struggle. There are no shortcuts to either.

For us, comrade Oupa was not “one of the activists from the 1980s”—he continued to think, to write and to fight until the bitter end. He will be remembered as a teacher and mentor and as a dedicated servant of the working class.

In the last video for our Nairobi edition of Capitalism in My City, we meet the Organic Intellectuals Network.

The short, white woman with a South African accent 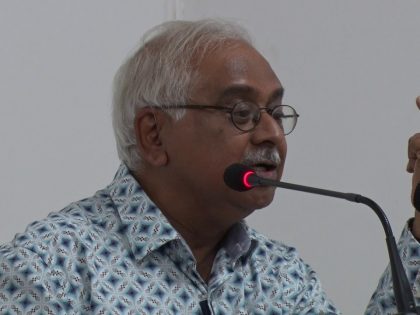 History will reward those thinkers whose ideals and actions remained aligned with the people.