There is a metaphor somewhere in Senegal’s first African Cup of Nations (Afcon) championship in its history. The 2021 Afcon, played last month and this week because of a postponement from last summer due to the COVID-19 pandemic, ended Sunday with Sadio Mane, the Liverpool star, scoring the decisive penalty in the final. With that, a one-month-long festival of football by Africa’s men’s national teams and everything else that surrounded it came to an end. Most of the players now return to their clubs, where some of them are stars, mostly in Europe. There’s a metaphor in that too.

The final itself was a contrast in style: Overall, it was not a spectacle. Very few finals are. This is not unusual. As for the metaphor, it was a contrast in styles that said a lot: Senegal’s relentless attacking versus Egypt playing spoilsport. The latter’s negative tactics and gamesmanship (stalling, over 50 fouls in the game, arguing with the referee, etcetera) began to reflect the tactics of Egypt’s regime; a military junta that incidentally uses football to slow down democracy. Of course, these tactics worked for Egypt in the past—they have seven Afcon trophies, including three in a row in the late 2000s. So this usually works for them, but not Sunday night.

Egypt’s national coach was also a throwback: African countries who trust European “expertise” over everything else. And if Egypt won, the military junta that’s been governing it since the mid-1950s—save for one year of democracy—would take credit. As for Senegal, it represented something else; its manager, Aliou Cisse, is African. And, unlike most other national teams that are subject to chop and changing and the hiring of mercenary European coaches that no one has heard of before (put the name of any African national team here, though this Afcon was different: 15 of 24 coaches are African), Cisse is a product of the country’s national association. He also played on Senegal’s national team (Afcon 2002 and the 2002 World Cup) and has been at the coaching helm for 10 years already. (Incidentally, Cisse missed the decisive penalty in the 2002 final against Cameroon that was hosted in Mali. This added to the drama of the final. At the end of Sunday’s game he collapsed on the field, sobbing.)

The tournament also showed glimpses of the Africa we are trying to leave behind, events which provided color for the usual Western media headlines. We saw the unnecessary deaths of eight, mostly Cameroonian, fans during a stampede at one of the games, and the shameless genuflecting to Cameroon’s dictator Paul Biya, including the spectacle after the final when a tired Kalidou Koulibaly, the Senegalese captain, was forced to walk up into the stands to go shake his hand. Add the CAF’s (the continental football body) incompetence on top of that—they blamed fans and a gate agent for the stadium deaths, and they mishandled the effects of COVID-19 wreaking havoc on teams’ player selection. In one infamous instance, CAF fined Comoros (one of the revelations of the tournament) for taping the number on the back of the replacement goalkeeper’s jersey in its Round of 16 match with Cameroon.

I’ve written elsewhere about how for regular Africans, the tournament is an avatar of sorts; of Kwame Nkrumah’s dream of a United States of Africa and for a new kind of African ethos. This is why the last word goes to Sadio Mane, the Senegalese playmaker who ended the tournament going to bed with the cup before traveling to Dakar to meet with rapturous crowds. Before the tournament, Mane, who plays at Liverpool (his striking partner at the club, Mohamed Salah, arguably the world’s best player now, captained Egypt in the final), was quoted as saying: “Why would I want ten Ferraris, 20 diamond watches and two jet planes? What would that do for the world? Now I can help people. I prefer to build schools and give poor people food or clothing … I give 70 euros per month to all people from a very poor Senegalese region to contribute to their family economy. I do not need to display luxury cars, luxury homes, trips, and even planes. I prefer that my people receive a little of what life has given me.” It’s that spirit of the Afcon that we want to carry forward off the football field onto our politics. 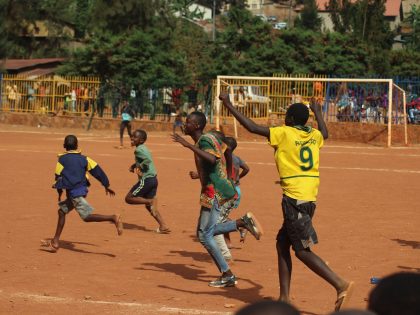 On this episode of AIAC Talk, Will Shoki and Sean Jacobs discuss the history and politics of the African Cup of Nations football tournament.

What can the Senegalese Sadio Mane’s story tell us about the marketing of dreams.

More than a two-dimensional African celebrity

A new documentary about Liverpool FC striker, Sadio Mane, is watchable, but suffers from the fallacy that sports and politics don’t mix.

The image of striker Pierre-Emerick Aubameyang, descending alone from the field after Gabon was knocked out of AFCON 2017 game, tells the whole story of Gabon’s malaise.