In his new film ‘Le Havre’, the Finnish director Aki Kaurismäki has beautifully weaved a whimsical, somewhat timeless portrayal of France — all baguettes, bars à vins and shoe-shine boys — with an unavoidably contemporary problem that plagues France’s ports, and moves in tides through its politics (the recent support for Marie Le Pen a good example); immigration. Paying homage to French cinema, skillfully but without pastiche adopting the composed, poetic style of Bresson and Renoir, Kaurismäki has made a stylistic yet subtle film about exclusion, exploring in a most delicate way the seeping of suspicion and xenophobia that — since France’s colonial exploits — have grown in parts of French society.

The film follows the poor, one time bohemian now railway station shoeshiner Marcel Marx (André Wilms), who drinks too much, works too little, and is hopelessly, haphazardly in love with his wife, and his dog, and perhaps life too. Eating lunch on the steps of the port one afternoon, a young Congolese boy appears suddenly. “Is this London?”, he asks, half submerged in the murky port water. “Is that where you want to go? That’s the on other side,” Marx replies, gesturing to the opposite side of the channel. But of course, the young boy Idrissa (Blondin Miguel) doesn’t leave, and instead Marcel offers him shelter and they begin a friendship, hiding from the farcically dressed ‘villain’-turned-benevolent detective Arletty.

Although the film makes something of a fairytale out of a serious social question, it beautifully, suggestively re-imagines the role and image of migrants in the stylish idyll of nostalgic France; where do the shipping containers full of dehydrated migrants fit into a baguette-ed, beret-ed charming small town, filmed in the colors and composition of a Tati film? Can they co-exist? Are they compatible? Surely they are both as much a part of French history. 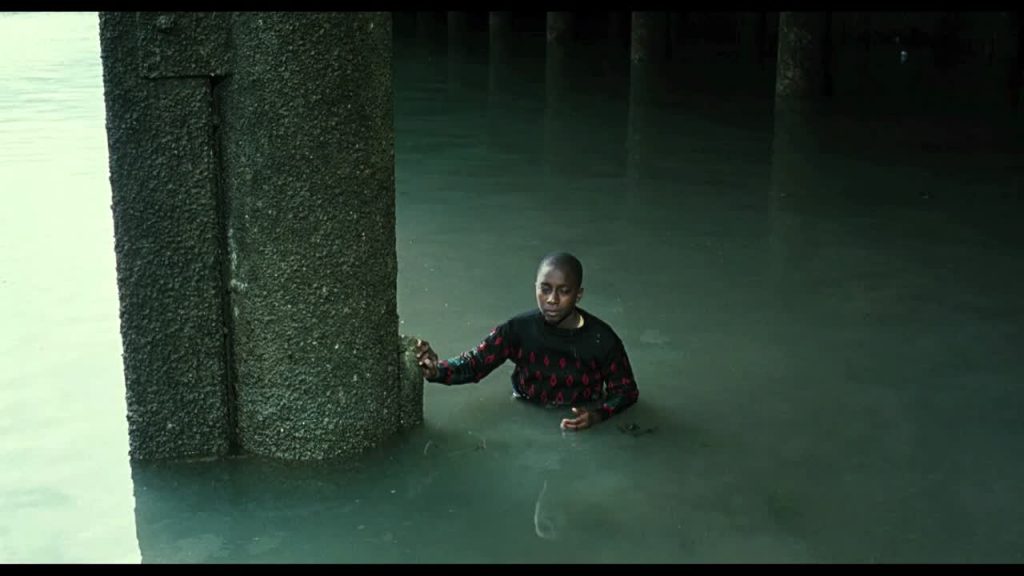 When a shipyard guard hears a sound from inside a locked container, a troupe of policemen, doctors and detectives turn up, and with great ceremony prise open the doors. “What’s this?” a bystander asks, “the living dead,” the guard replies. The migrants are put into detention centers, or shipped back to their home countries, and Kaurismäki seems to limply point to the now infamous French detention centers like Sangatte. It’s a contentious issue, particularly since the steady flow of criticisms by groups like Amnesty International who have observed consistent mistreatment in many French-run detention and ‘holding’ centers

This is Kaurismäki’s first in what he intends to be a trilogy of films set in ports, but it seems to be amongst a remarkable amount of new films in recent months that have used migration, detention and illegal sea crossings as their subject matter.

Films such as ‘The Colour of the Ocean’ by Maggie Peren, ‘Special Flight’ by Fernand Melgar, ‘Terraferma’ by Emanuele Crialese, ‘A Chjàna’ by Jonas Carpignano, ‘Mare Nostrum’ by Andrea Kunkl, Giuseppe Fanizza and Giorgia Serughetti, ‘[S]COMPARSE’ by Antonio Tibaldi, ‘Qu’ils reposent en révolte’ by Sylvain George, ‘The Invader’ by Nicolas Provost or ‘Ferrhotel’ by Mariangela Barbanente, have all examined the issues in various filmic ways. Clearly, it is a pressing, important subject matter. The horrific news story that told of 70 Libyan refugees left to die in the Mediterranean Sea speaks of the dubious attitudes held toward migrants by large European, multinational authorities and institutions.

The war that doesn’t say its name

In the Democratic Republic of the Congo conflict, as well as peacemaking, have become ends in themselves, while the fighting is carried forward by its own momentum.

How we tell the story of African film history

For most outsiders, modern Ethiopian cinema means Haile Gerima and Salem Mekuria. But others, in addition to these, made its rich cinema history.

The skeleton in the closet

The novelist Nadifa Mohamed complicates Britain’s troubled, racist legal history through the personal tale of one otherwise insignificant person, a Somali immigrant to Cardiff in Wales.

Life to the sound of gunfire

Nigerians fleeing extremist violence at home take refuge across the border in Niger among an already fragile population. Together they proceed to carve out a way to live better lives for now.

A big African literature prize in an African language

The Kiswahili Prize works to undermine the marginalization of African languages in literary culture. An interview with one of its founders.

The consequences of Russia’s invasion of Ukraine for African food security and the need for greater food sovereignty.

In Northern Cyprus, African students, many of them Nigerian, study diligently for tertiary degrees while juggling multiple income streams in a peer-to-peer system for collective survival.

We are actually reading

The Radical Books Collective teams up with Africa Is a Country to bring you progressive conversations about books, literature, and publishing on this platform.

The harrowing execution of Patrick Lyoya, a Congolese refugee in Michigan, and the unfulfilled promise of resettlement in America.

The doctor from District Six

The University of Edinburgh will award an honorary doctorate to Joe Schaffers, a working-class educator from Cape Town, South Africa. It will be a new benchmark for this tradition.

Against the youth fetish in politics

Politics is about effectiveness, and casting youth as a political subject (rather than simply a demographic), is a bad way to do politics.

Is the academic boycott of Israel a violation of academic freedom?

A decision to rescind an invitation to Israeli academics to a conference in South Africa, revived a tactic of the anti-apartheid struggle. Is it effective?

The Sixth International Congress of African and African Diaspora Studies in Accra in August 2023 foregrounds the struggle against African Studies as a form of knowledge production located, for the most part, outside Africa.

Cameroonian economist Joseph Tchundjang Pouemi died in 1984, either poisoned or by suicide. His ideas about the international monetary system and the CFA franc are worth revisiting.

Mexico is fighting to regain sovereignty over its energy future, and African Leftists would do well to look to it for some answers.

For World Refugee Day, Africa Is a Country Radio visited Tijuana, Mexico to talk with Josiane Moukam about what life is like for African migrants at the US border.

A new politics, from the ground up

Cape Town-based activist Axolile Notywala wants to bring people from different backgrounds together to build a movement on what it means to be free in South Africa.

Punks of the Witwatersrand

The Rise and Fall of National Wake, South Africa’s first multiracial punk band at the height of apartheid, that sang about state violence and political freedoms.