As a heritage studies scholar, I have been absorbed observing the unfolding of commemorations around Nelson Mandela’s passing. The kinds of tributes paid by corporate entities and companies have especially caught my attention. This phenomenon is a feature of public commemoration globally, with corporate entities sponsoring messages of tribute following sudden national tragedies, the death of celebrities or public figures of esteem.

In South Africa, big brands such as Coca-Cola, Boeing and Sasol have, for example, claimed large tracts of advertising real estate as they have staked out their tributes to Madiba. These kinds of tributes are fascinating because they pose difficult questions about the lines between commemorations and marketing activity; between sentiment and self-interest. Are corporate entities really well intentioned in celebrating Mandela the freedom fighter or are they merely using these tributes to position their brands on the right side of history?’

Nelson Mandela presents a complex, complicated, even contradictory set of public images that have been cycled and recycled in ways that allow many stakeholders to appropriate and mobilise his legacy. Of course corporate entities do not have a responsibility to uphold civic values; but that does not mean we cannot engage in a case-by-case scrutiny of how – and in what ways – these mediated projects seek to pay heed to the core values and ideals Nelson Mandela stood for, when they pay tribute to him. As an example, I want to look at one popular, well-intentioned and well-received South African corporate sponsored tribute dedicated by the South African retail chain, Woolworths. This tribute is framed as a flash-mob of singers from the Soweto Gospel Choir singing the  cross-over hit Asimbonanga inside a Woolworths store.

It opens with a series of candid camera style shots depicting the store and a series of predominantly white customers. This choice of cinematic style immediately situates the video in the visual tradition established by the master of South African candid camera, Leon Schuster, who is known for black-face parody of subalterns in his films and movies that continue to attract large audiences in South Africa.

The singing then ensues having been initiated by one worker who appears to be working a counter area. He wearily wipes the counter top and slowly but resonantly starts singing the lines of the anthem…

…which is then echoed by other ‘workers’ in the store. Indeed, the singers are all black, and are portrayed predominantly as Woolworths employees: as shelf-packers, cashiers and staff who manage the day-to-day operations that uphold the trade in high-end goods to a predominantly white South African public. And so, we enter into the image of the happy, singing, black South African labourer who toils away at soul destroying work with a sense of self-denial but who also find sustenance in a “vernacular tradition” of singing that sooths the struggle of hard labour. This is the image of the backbreaking black labour that built up apartheid, which is poetically captured by Gerard Sekoto in his vivid, evocative painting, The Song of the Pick.

Shots then feature customers first looking concerned and a little anxious as black workers start gathering together in song. 34 seconds into the video we cut to a shot from a surveillance camera. 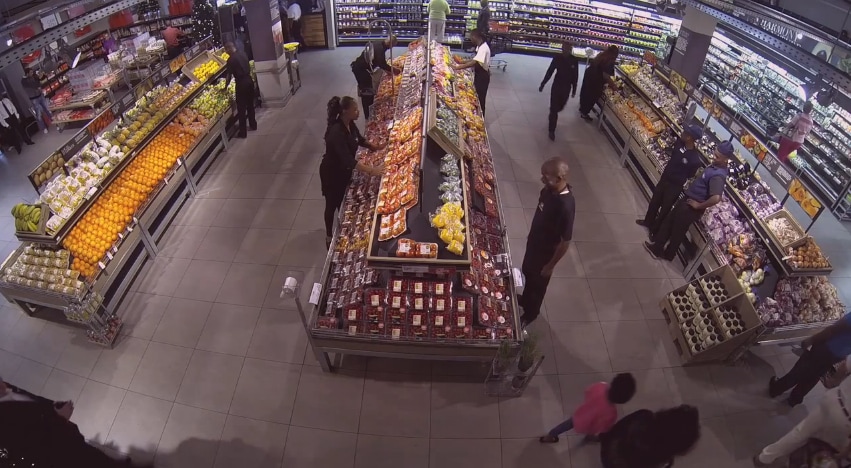 This serves as a form of reassurance against the background of disturbance in so far as it asserts the primacy of a dominant, authoritarian white gaze. This is the Benthamite, Panoptic gaze. It is the gaze of the prison and the prison warder, which can be paralleled with the uniformed workers, like uniformed prisoners, labouring in this tribute. The entire video is shot in the confines of a Woolworths store, suggesting that the retail store can be construed as a kind of post-apartheid total institution. Nevertheless, the image of the uniformed workers strikes an immediate contrast with the iconic uniformed prisoner who is Mandela. It also enables an image of workers as dangerous, workers who harbour criminal intentions and who need to be closely monitored. This is the image of contained, domesticated worker unrest, which forms a striking contrast to Marikana.

As the singing continues, the audience anxiety transforms into curiosity and excitement. The workers gather together in formation in the fruit and veg section singing before what is now a mixed crowd of customers holding their cellular phones aloft trying to capture the scene. We see one black worker shuffling in between shots smilingly serving snacks to the audience. Another ‘singing black customer’ hands out roses.

The middle sequence features a number of shots of black customers ogling the singers, eagerly capturing their compatriots rousing performance. This reinforces an image of the apparent diversity of the chain’s customers.

Watery-eyed smiles accumulate rapidly towards the end of the video when the singing is most resonant. The audience observes silently, or captures the performance on their phones but refrain from singing along. This suggests a kind of class divide between the cultural life of the working classes and the middle and upper classes who are entertained by such public theatrics.

The singing concludes with the choir members throwing up their fists signalling the struggle heritage of the anthem.

This is met with voluble applause from the crowd of customers, some of whom are shown to be wiping away tears. There are many surveillance camera shots packed into the concluding scenes.

The singers disperse quietly and an image is created that, very quickly, business returns to normal, suggesting a return to normality, a return to Woolworths operations, the stasis of order, of black labour and white and wealthy consumption, that Mandela may have died but Woolworths is still there. A message of tribute then flashes onto the screen in Woolworths branded typeface concluding the 3 minute long video.

What to make of this? Judging by the comments on YouTube, many South Africans would not have read the tribute in this way. Who can judge public mourning? But that does not detract from the reality that this well-intended, well-meaning tribute presents itself as a basket of unintended narratives that are hard to associate with what Nelson Mandela struggled for. Indeed, it is a supreme irony that this video reproduces some of the very injustices Nelson Mandela struggled against and re-presents them as a tribute to him.

How can we judge the ways in which such commemorations are framed and the ways in which South Africans go about consuming tributes? There are many such hypocritical, contradictory commemorations circulating in the South African media space at the moment. Such mediations offer a stark representation of the contradictions that structure post-apartheid South African society. But they also present a serious indictment on how far we’ve come in relation to the apartheid past, the transition, and the kinds of post-apartheid futures mediated commemorations like this enable. It appears we still have a long struggle going forward after we’ve wept and laid the past to rest.