In May 2015, Zakwe, a 28 year-old woman from Soweto, in Johannesburg, told ActionAid: “They tell me that they will kill me, they will rape me and after raping me I will become a girl. I will become a straight girl.” Earlier this week, the body of Noluvo Swelindawo, a 22 year old lesbian young woman was found discarded near the N2 highway near Khayelitsha, the largest township in the Western Cape. Noluvo was shot dead after being abducted from home and gang raped. She was known in her community for her LGBTQI activism.

Her friends are convinced she was targeted by a group of “well known thugs and gangsters in the community,” specifically because she was lesbian. 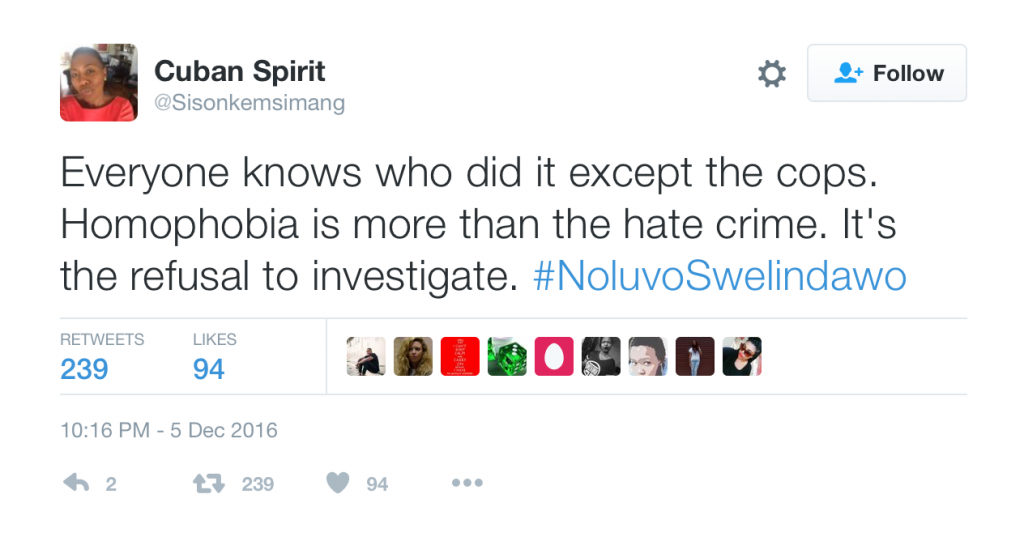 Novulo’s death was likely a homophobic hate crime and her killers are statistically likely to never be found or brought to justice (for lack of investigation).

Absolute numbers are hard to come by, but somewhere between 15 to 37.5% of South African men have admitted to raping a woman – whether an intimate partner, or a woman with whom they had no previous relationship. Basically, at best – at best – one in six South African men is a rapist. In Diepsloot, an informal settlement in northern Johannesburg, a recent study showed that 56% of men admitted to either raping or beating a woman in the last 12 months, and of these, “60% said they had done so several times over the past year.” Let that sink in: Almost four out of five had raped their first victim before the age of twenty.

One in three women (worldwide) has been beaten, coerced into sex, or otherwise abused in her lifetime.

One in three. For those of you who have a mother, a sister and a female friend all at the same time, let that sink in: one in three women has been beaten, coerced into sex, or otherwise abused in her lifetime. Maybe it’s time to start talking to each other.

In South Africa, over 25% of all women will be raped in their lifetime and 75% of all rapes are gang rapes. I am not sure that there are italics enough in the world to express what I feel about these statistics. For every 25 “men” brought to trial for rape, 24 will be acquitted. And those are just those who are brought to trial.

Here’s the testimony of Nomawabo, 30, from Limpopo, South Africa:

At school I was betrayed by my best friend. He told me to come to his house for a school assignment but when I got to the house we fought until he hit me so hard I collapsed, and then he raped me because he said I needed to stop being a lesbian. Afterwards I got pregnant and had a baby. The second time my soccer friends and I were kidnapped at gunpoint and they took us somewhere far away and did what they wanted with us for three days. We told the police but the case just disappeared. Nothing happened because they all thought I deserved it. These men are still walking free. 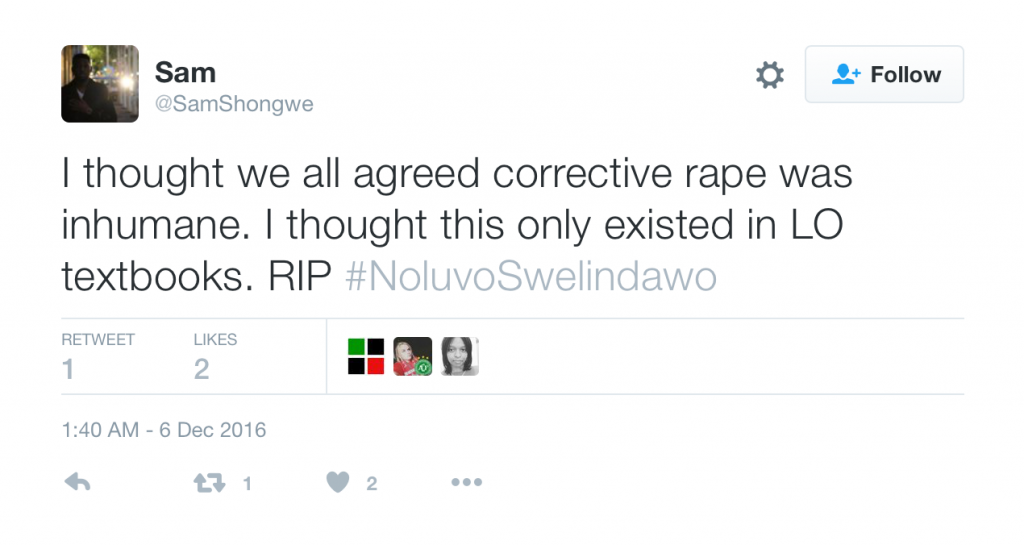 The term “corrective rape” (as opposed to regular rape?) was introduced into the common vernacular when it became a widespread practice for (South) African males to attempt to rape the lesbian out of their victims. South Africa was the 5th country in the world to legalize same-sex marriage. For South African (and other African) lesbians, this has proved to be more of a target on their backs than a civil rights victory.

In their 2010/2011 Annual Report, The Triangle Project, a South African organization whose stated mission is challenging homophobia and appreciating sexual diversity, wrote this:

Our understanding is that rape is a form of gender violence that is rooted in patriarchal and heteronormative systems of control and power. Rape is a means of maintaining control and power over women and their bodies and of policing gender and sexuality norms. These norms prescribe what a woman is, how a woman should behave and stipulate that women’s bodies belong to men. It is precisely for these reasons that lesbian women in particular are targeted.

Rape is a violent, inhumane, incomprehensible abomination. If not a hate crime, it is certainly hateful. I do not subscribe to the idea that rape can be classified by circumstance or by motivation. To the victim, does it really matter if the rapist was motivated by lust and power rather than by a sick desire to change his/her sexuality? By classifying different types of rape and by extension, assigning different sentences for what is essentially the same crime, are we not introducing yet another shade of grey into a conversation that needs to be completely black and white? Responding to my question by email, Melanie Nathan, Executive Director of the African Human Rights Commission said:

These are woman who might not otherwise have been raped and these men may not have committed the rape but for the vengeance factor of the woman being a lesbian and the anger it invokes in the man. The idea of a lesbian – a woman not needing a man – often emasculates a man and so he is proving his power over her…  it goes to the core of who she is. Of a perpetrator purporting to control her sexual orientation under the false notion, perpetuated by religious and cultural dogma, that she can be changed. I believe that because of rampant homophobia in some cultures and especially now in Africa and South Africa, it must be prosecuted as a specific hate crime.

I disagree. I believe that making distinctions based on the motive of a specific rape muddies the waters. All rapes are about the subjugation of women and men trying to assert their physical and sexual superiority over women. Yes, being a lesbian (a population already living through social discrimination) certainly adds a layer of “motivation” for these rapists, but so does wearing a short skirt, or being flirtatious, walking down a street, rejecting a man’s advances or breathing while female.

In South Africa, between 15 – 37.5% of men admit to intercourse with a woman without consent and 1 in 4 women have been raped (and those are the women we know about). Perhaps lesbians are more at risk than heterosexual women (there isn’t enough research to say definitively), but with those statistics, is that difference in risk significant enough to justify a separate class of rape and the subsequent clouding of the conversation and dilution of law enforcement that comes with it? There is no such thing as “corrective rape;” there is nothing about rape that is correct. 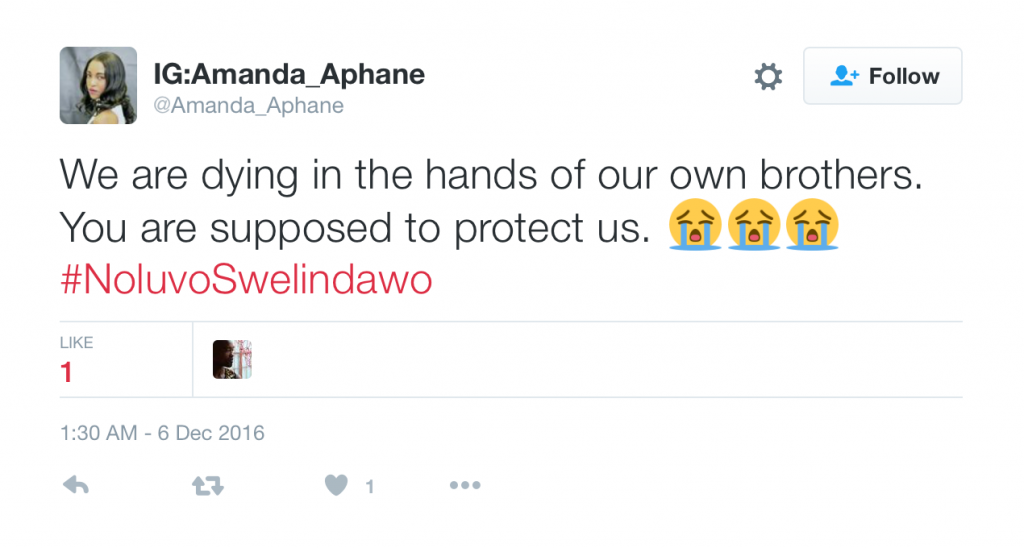 “Corrective” rapists are motivated by the idea that homosexuality is “unnatural.” We should be teaching African boys (and shouting it from every rooftop) that every rape is inarguably unnatural, that the perpetrator forfeits their membership in the human family and is worthy of maximum punishment.

Revisiting the pre-Internet papers of left, anti-colonial revolt from the continent can remind us of messy, rich alternatives.

The limits of the cop drama

A bleak new television drama, ‘Donkerbos,’ explores secrets in small town South Africa, but fails to offer alternatives to the tropes of good vs evil.

How to make sense of Khoisan revivalism

Khoisan Consciousness is sweeping across South Africa. Exploring multiple perspectives is vital to make sense of it.

The “follow-back” economy of Nigerian Twitter represents a struggle for recognition in a vastly unequal and status-obsessed society.

The people are our mountains

On the 50th anniversary of his murder, those who fought alongside Amilcar Cabral give a painful reminder of what could have been had he lived to see Guinea Bissau’s independence.

It’s tempting but unsatisfactory to blame poverty and weak regulation for the dumping of used vehicles in Africa.

A democratic energy transition in Tunisia

It may seem obvious that a real transition to renewable energies is urgent, but not all transitions are the same or fair.

Under the surface of modern economies

We need to rethink how people seek sustenance and wealth, but not divorced from their moral values, convictions, and expectations.