We hope to build an archive of reviews of classic films in African cinema to build a resource, but also to help readers learn more about the history of different film cultures on the African continent. Where possible, we’ll link to where you can watch/rent/see them, in a bid to get more people to see the films. If you have any suggestions, please comment below this review. We’ll start with a bang: Ousmane Sembène’s “Xala.” Before we begin, here‘s the entire film on YouTube.

“Xala” (1974) is a powerful political narrative. At times edging toward the surreal, at others an acute depiction of the complexity of the freshly independent Senegal, the film has become famous for its striking comment on the impotence of the new political bourgeoisie. In the use of repetitive visual symbols, Sembène creates a wicked juxtaposition of the traditional and the modern in Senegal. The briefcase – the garb of business and efficiency, takes on a surreal, almost voodoo status. Sembène drives it to a comic extreme; French officials banished from the Chamber of Commerce carry nearly four each, their hands straining to hold onto the mass of shiny black nothingness, while members of the newly instated Senegalese cabinet sit in their new chamber, smiling with glee at cases farcically stuffed with cash.

That the film is an adaptation of sorts is important to address. The book was published only a year before the film’s release. In questioning Sembène’s audiences, Josef Gugler and Oumar Cherif Diop (who wrote this article about Xala) make clear that the different mediums reflect different aspects in the concern of the narrative; the book addresses the complexities of kinship – it plays more with El Hadji’s decision to take a third wife, whereas the film focuses on the political climate and interrogates the new political order instated after independence.

Why did Sembène adapt his literary work into this new visual language? In adaptation, Sembène is able to forefront different narrative considerations. His book would have reached a small Senegalese readership, however Sembène theorized that a film circulates in a completely different sphere. In the film’s interchange between French and Wolof – a powerful statement on the colonialisation of langugage – Sembène utilizes the power of the cinematic to jump between different social circumstances in a way his book was unable to do.

Through these jumps in language, Sembène questions the possibility of reclamation of an independent Senegalese identity. Rama, El Hadji’s hip activist daughter refuses to speak French, against her father’s wishes. She brings alive notions of a synthesis of the traditional and the modern, and its possible cultural counterpoint in the future. Her relationship to her mother, Adja, who Sembène casts on the side of the traditional, indicates Rama’s power – it seems she is a vehicle for Sembène’s slight glimmer of optimism. 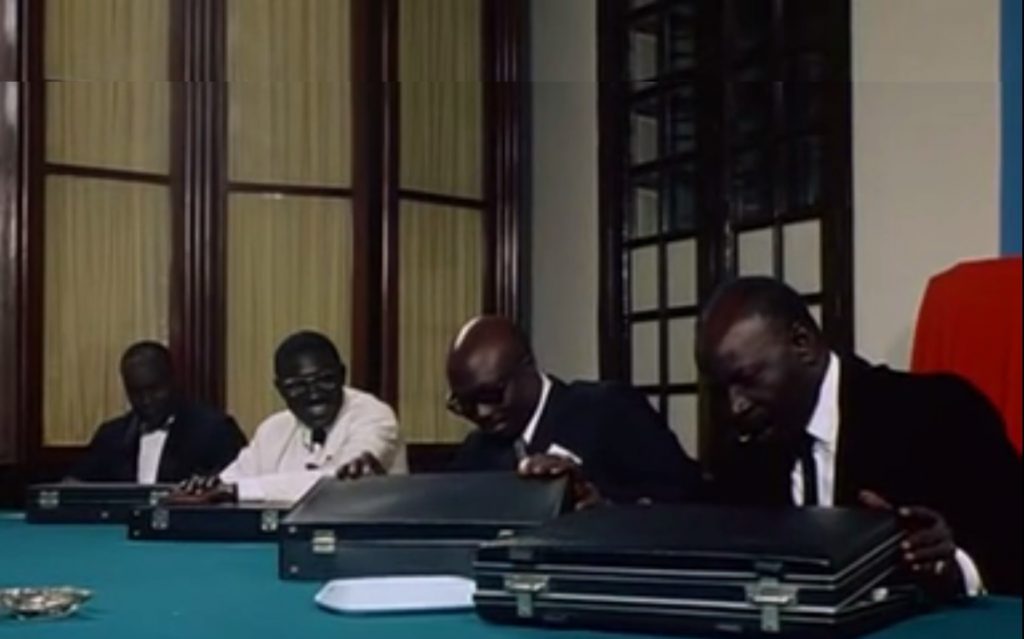 Both versions of “Xala” remain within a naturalist genre. This is appropriate for his didactic aims – Sembene’s filmmaking was always political and focused on notions of political enlightenment. But at moments in Xala, he moves into a surreal register to make a pertinent point as to the (in)stability of the post-colonial order. The opening scene shows members of the new cabinet removing neoclassical busts of Marianne, a symbol of France. It’s a clear statement of his cynicism toward the ‘independence’ of the state. As Gugler and Diop write, it suggests ‘the ejection of those symbols, and indeed of the colonial masters, is not for real’ (Gugler & Diop 1998: 152). He signifies, through the instalment into office of the politician who has earlier been seen robbing a beggar – that neglect, exploitation and ambivalence is the status quo of the new political economy.

Another point worth making is the paradox of language – cinematic, literary and political. In contrast to his literary version, Sembène consciously attempts to alienate the foreign viewer in the film from some of the more idiosyncratic symbols and practices of the characters. The best example of this is of the un-subtitled Wolof songs, which act as a co-text for the Senegalese viewer, and yet are inaccessible anyone who doesn’t speak Wolof. In his text, this alienation does not occur to the same degree as Sembène explains cultural intricacies to the reader. For the Senegalese audience, the message of this co-text sharpens the political message of the film. We can see how Sembène plays with these different languages – his film is a more audacious portrayal of the world of the “Xala”, weaving intricate tensions by using French and Wolof, while the language of the cinema instigates comparison, frustration, and critique through the accompanying visuals.

The viewer cannot escape Sembène’s sardonic wit; the shot of El Hadji driving to his wedding, squeezed between his first two wives – the African Bardot and Mama Africa casts him as caught in-between, in a cultural limbo. He’s the epitome of a new kind of political impotent – vulnerable, gormless and pitiful, neither proud of his heritage nor capable of existing in the new political state.

The tautology of the film shows how his sexual vulnerability – at first in his inability to consummate his marriage however clothed he is in ‘potent’ European props (which all fail him and in the end) but which ends in his complete degradation, naked and covered in spit. He is subject to the ritual humiliation and salvation of the traditional (Mulvey, Fetishism and Curiosity, 1996: 123), a cruel ending after Sembène has so blatantly shown El Hadji’s ambivalence toward it.

“Xala” is a riveting commentary of the tension of the postcolonial reality. Taking his audience further into a political critique than he did in his book, Sembène’s obviously socialist politics permeate his  of a new political class who fail to fulfil their productive function in both a basic human way, and in an abstracted, political way. Sembène has masterfully exploited the hieroglyphic possibility of film language – wrapping images in symbols and associations available or unavailable to different audiences; a strong political statement in itself. It is a powerful portrayal of the slightly surreal, yet tangible complexities of the postcolonial experience.

Revisiting the pre-Internet papers of left, anti-colonial revolt from the continent can remind us of messy, rich alternatives.

The limits of the cop drama

A bleak new television drama, ‘Donkerbos,’ explores secrets in small town South Africa, but fails to offer alternatives to the tropes of good vs evil.

How to make sense of Khoisan revivalism

Khoisan Consciousness is sweeping across South Africa. Exploring multiple perspectives is vital to make sense of it.

The “follow-back” economy of Nigerian Twitter represents a struggle for recognition in a vastly unequal and status-obsessed society.

The people are our mountains

On the 50th anniversary of his murder, those who fought alongside Amilcar Cabral give a painful reminder of what could have been had he lived to see Guinea Bissau’s independence.

It’s tempting but unsatisfactory to blame poverty and weak regulation for the dumping of used vehicles in Africa.

A democratic energy transition in Tunisia

It may seem obvious that a real transition to renewable energies is urgent, but not all transitions are the same or fair.

Under the surface of modern economies

We need to rethink how people seek sustenance and wealth, but not divorced from their moral values, convictions, and expectations.