In the weeks leading up to the Nigerian election this weekend (official results expected sometime today), Reuters stirred up a lot of speculation with a report which claims the Abuja government is secretly using white South African mercenaries— read apartheid-era security forces—to fight Boko Haram in Northeastern Nigeria.

Then last week, The New York Times realized that Nigerian Twitter feeds have actually documented “white soldiers atop armored vehicles on what appears to be a major road in Maiduguri.” The Nigerian government initially refused to comment, then claimed that the so-called mercenaries were really “technical advisors,” only there “to provide training and technical support for foreign-bought weapons.”

Approximately zero percent of journalists were satisfied with the government’s explanation. And yet, even as international news outlets have scoffed at the government’s attempts to cloak their reliance on foreign military personnel in technocratic mumbo jumbo, an overwhelming among of coverage has relied on the idea that the mercenaries are efficient in order to justify, or at least understand, why the government of a country that was once so closely associated with the anti-apartheid and pan-African movements, could rely on the very same soldiers that fought to uphold the white supremacist regime in South Africa.

And we do know, following reports of the death of the former South African soldier Leon Lotz in Borno state on March 9, that apartheid-era forces are participating in these military (and by proximity, political) campaigns. In the 1980s, Lotz fought for a paramilitary unit, known as Koevoet, that was euphemistically tasked to “root out” nationalist guerrillas in what is now Namibia. The unit infamously targeted civilian sanctuaries including refugee camps and hospitals — and Lotz himself was formally accused of the murder of two civilians who survived the Kassinga massacre. A 1989 government inquest “determined that Lotz and Bouwer took the two into custody for interrogation, murdered them and buried the bodies in a water-filled pit,” as Binaifer Nowrojee and Bronwen Manby document in their book Divide and Rule: State-sponsored Ethnic Violence in Kenya.

Despite the fact that their crimes are public record, The Economist throws its support behind the South African mercenaries. The neoliberal stalwart assures us that their presence is a good sign — while managing to transform white men into actual guns, and reduce the grisly conflict into a bro-y business performance report:

Bringing in experienced hired guns may be a clever move by Nigeria’s army. It has performed abysmally against Boko Haram.

And The Economist isn’t the only publication relying on the contrast between the corrupt and bumbling Nigerian army and these ultra effective, white killing machines. Here’s The Conversation describing the difference between the Nigerian forces and the South African mercenaries:

(T)he Nigerian security and military forces have been embroiled in scandal after scandal ranging from corruption and desertion to human rights abuses. All this has effectively restricted their ability to act decisively against the designated terrorist organisation, which has thrived in the north east of the country over the past three years.

The use of South African mercenaries is a logical step for Jonathan’s government who has been battling the insurgency with little success. These men have a track record of providing quality counter-terrorism training through various pop-up private military and security companies. They have assisted several governments in overcoming insurgencies in Angola, Sierra Leone, Iraq and Afghanistan.

There are other textual examples we could highlight, which also accommodate the mythic power of the mercenaries. But what is most striking to me is how consistent the visual narrative is in all these reports. 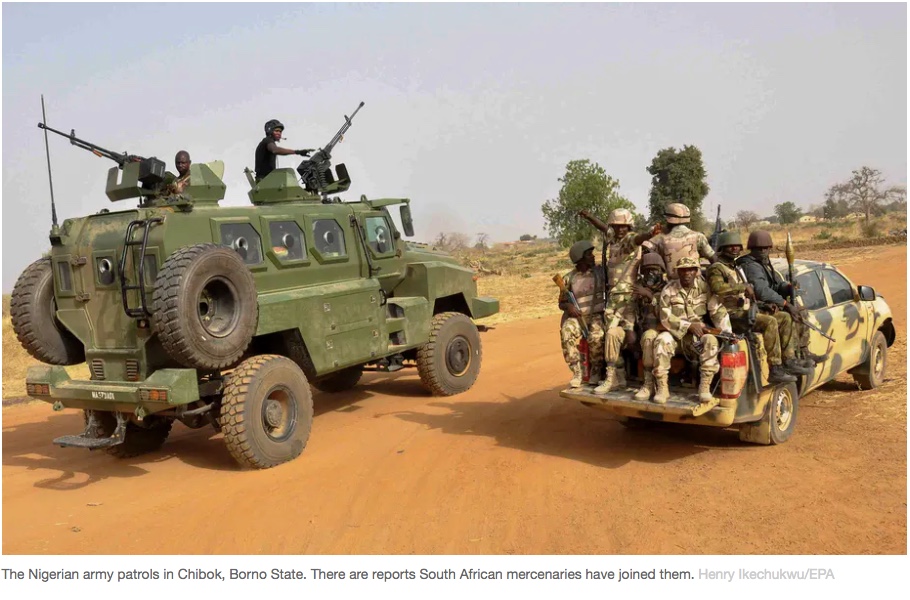 Despite the fact that the story follows reports of white South African mercenaries sighted (and photographed) atop armored vehicles in Maiduguri, by and large only Black Nigerian soldiers are pictured in the photos that accompany these articles— ie, black bodies are made hyper-visible in a story about white mercenaries. When photos of the white South African soldiers are included, they have been pulled from archival sources— which means that they actually remind us that these soldiers fight to uphold the white supremacist regime. At the same time, the photos are carefully selected to represent the white South African soldier as a sharp-sighted, rational commander. This soldier, we’re assured, never loses control, or glorifies violence (though there are plenty of archival images that would tell a different story). Equally chilling, the selection of these photos refuses to show the way the white South African soldier has aged. His body is perfectly invulnerable, always at its physical peak. 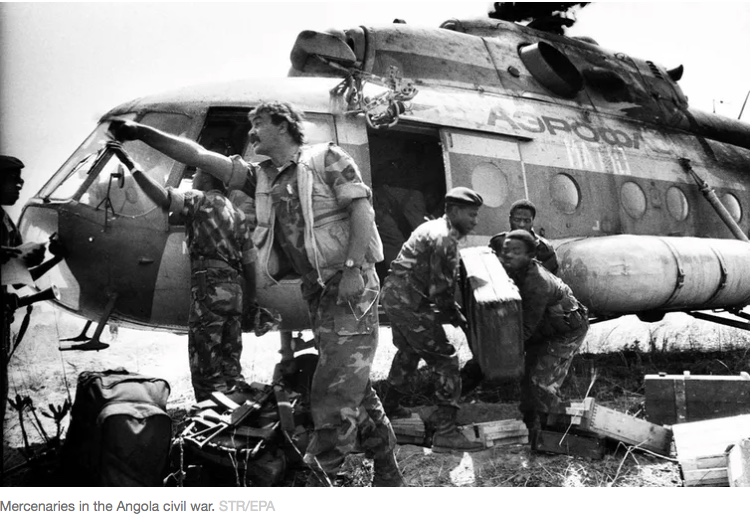 To understand what this immortal (nay, deathless) image stands for, and how it participates in the naturalization of violence, we could start by examining the history of the most famous South African mercenary operation — Executive Outcomes.

Eeben Barlow, who was one of the apartheid state’s most senior military strategists, founded his company just when the Nationalist regime was beginning to falter. As Jeremy Harding observed back in 1997, Barlow quickly identified “political and military instability in Africa to be a market issue” — and the company’s most lucrative contracts involved secure unstable regimes in the oil-rich nations of Angola and Sierra Leone. While Executive Outcomes consistently conducted operations around extractive concessions, “Barlow has a way of speaking about the company’s benefits to civilians as though he were running a Christian outreach project.”

We needn’t defend the Nigerian government or the conduct of the Nigerian military to ask why the corruption of the state narrative effectively legitimizes the activities of the South African mercenaries — which are by definition — illegal. The often repeated, vague assumption that white mercenaries are “effective” ignores the South African soldiers’ record of human rights violations — and gives men like Eeben Barlow a get-out-of-jail free card.

White South African mercenaries have traded on lesser evil narratives and no alternative ultimatums which conflate the violence that has been inflicted on civilian populations in unimaginably horrific ways with the violence the government needs to control in order to secure the election — and as John Campbell points out, they do not promise an end to armed conflict.

And, at the end of the day, South African mercenary groups like Executive Outcomes capitalize on corruption narratives in post-colonial states, expertly mixing fears about inefficiency with dystopian imaginary of death and decay which demands evermore vigilance, evermore impenetrable, indestructible bodies that make demilitarization unthinkable.

Our annual publishing break coincides with the 10th anniversary of the Marikana massacre. We are planning a public event on August 20th to reflect on its legacies.

The afterlives of Marikana

Why do representative bodies like the union, the party, and the so-called Left seem to fail its constituents during struggles like Marikana?

Accountability—insofar as it ever existed within the South African Police Service—has been reduced to a merely theoretical concept. It is time this changed.

Where do trade unions go from here?

In South Africa, the seismic shifts in unionism triggered by the Marikana Massacre have sadly not resulted in a union movement better equipped to tackle the issues that workers face.

Dreaming of the green blanket

The impact of the Marikana massacre on South Africa’s student movement for free education, and an end to outsourcing, has been overlooked.

The challenge presented by Argentina: What is the best way to deal with global fiscal pressures in a local context of high expectations and public demands?

We are all potential advocates

Director Shameela Seedat’s film about trainee lawyers provides a sort of celebration of youth on this continent and a vision of the next generation of Africans.

Lula can set the bar higher for a new presidency

Lula’s challenge in Brazil: To be successful with proposed reforms, he’d need to take back the anti-systemic appeal stolen by the far-right.

Mexico’s president has a mandate for radical change, but this change must be negotiated within a context of limits produced by the neoliberal period itself.

The Nigerian-American author of the novel “Harry Sylvester Bird” talks to the Radical Books Collective ahead of her appearance at their book club.

The ground has shifted

Western conservation NGOs condemn violence against Maasai, but also don’t want herders or subsistence hunters on land they want to control and profit from.

A post-neoliberal road to socialism in Chile

While Chileans have defeated the post-authoritarian neoliberal regime, they face major obstacles on the road to a post-neoliberal social democracy.

A new phase of struggle in Honduras

Xiomara Castro’s leftist government must create capacity for self-determination in a state vulnerable to US pressure and constructed to serve monopoly capital.

Warsan Shire’s prayer for the unmourned

The British-Somali poet Warsan Shire’s audacious yet uneven volume of poetry captures the quiet loneliness of African immigrant lives in the West.

The left’s win in Colombia signals that after more than six decades of war, people just want to live with dignity and in peace.

South Africa’s ruling party’s devotion to its policy of cadre deployment is an indication that it values its own power more than the public interest.

The novelist on 3 books he returns to: by Wole Soyinka, Ibn Khaldun, and a third on the history and the system of writing of an early 20th-century Cameroonian king.